Earlier this year, I found myself lucky enough to be anchored near the north-east of the main island of Malta on board motor yacht Amore Mio. Uninhabited since World War II, St Paul’s Island loomed overhead, laden with history and yet beautifully desolate. One solitary coastal watch tower sat above us on the cliff’s edge, the last bastion of a fortified bygone era. The entire coastline of Malta is peppered with these lookout posts built by the Knights of Malta during the 17th century. Manned nightly, they were used to watch the seaward approaches, and to raise the alarm with a fire signal in the event of an imminent threat.
The Maltese archipelago consists of three main islands – Malta, Gozo and Comino. The dramatic coastline makes for spectacular cruising, particularly when aboard a high-performance yacht such as 45m Amore Mio. She is the biggest and most powerful sports-yacht ever built in the Netherlands and is a glorious example of a custom superyacht; a true leader in her class. Built by Dutch shipyard Heesen in 2016, she is designed for outdoors living, with a vast 90sqm sundeck, and a rapid top speed of 30 knots. With angular exterior lines by Omega Architects and interiors designed by Cristiano Gatto, Amore Mio combines power with comfort in a fusion of sophisticated elegance and contemporary style. Her facilities include a cinema, pool, BBQ and infinity terrace, in addition to a 12 metre-squared swimming platform and the largest collection of watertoys on board any yacht.

Since taking delivery, her owner has spent most of his time on board using her as his Maltese summer home at sea, as was intended. She is based year-round at Manoel Island Marina, which is centrally located in Gzira, and where we first step aboard the yacht. The newly launched port Marina di Valetta is the latest addition to the historic island of Malta. Located on the edge of the Baroque fortress city of Valletta and neighbouring Amore Mio’s home port it provides the perfect base from which to explore myriad treasured coves and crystal-clear bays. Accommodating up to 27m yachts within its 250 berths, it also hosts alongside transit berthing for yachts of up to 50m and provides direct access to Valletta’s cobbled streets – the first grid system of its kind.
It’s an early morning in June, and the sun is rising over the historic city. The majestic dome of St John’s Co-Cathedral pierces the dramatic skyline. Baroque in character, but defined by elements of mannerist, neoclassical and modern architecture, Valletta is a brilliant feat of engineering, and a lasting legacy of the Knights of St John. Sitting up top at Amore Mio’s open helm, views of churches, spires, and imposing buildings stretch as far as the eye can see, as Captain Tripp Hock eases us out of the marina, and we glide serenely by.
The Maltese have a strong maritime heritage, but Malta itself doesn’t form part of the Mediterranean yachting milk run. Offering something vastly different from the likes of St Tropez, Capri or Croatia, the rocky islands provide hidden bays, secluded anchorages and alternative diving. Dwejra Bay is Captain Tripp’s preferred spot, and it’s clear to see why. Located off Gozo just behind Fungus Rock (so-called for a rare type of medicinal plant that naturally grows there) this dramatic coastal formation provides a protected bay for bathers and yachts alike (even up to 80m), with an impressive backdrop of waves spilling over rocks.
“It’s a tiny narrow entrance that is deep enough for us to cruise into, but as soon as you enter you have a feeling that you’re in an inland lagoon because there are high walls and cliffs surrounding you in the anchorage,” explains Captain Tripp. “It’s very unusual, and very otherworldly. And it’s definitely one of the best spots in Malta to experience by yacht.

Near to Dwejra Bay is one of Gozo’s top dive sites, the Blue Hole. Naturally carved over time by the attrition of water and wind, spectacular limestone rock formations allow divers to swim through arches, explore sea caves, and delve into the island’s wartime history via an array of military shipwrecks.
Fishermen have always used the inland sea as a mooring point for their boats and fishing huts, so to access the private sandy beaches found on the north side of Gozo it’s best to run a tender to shore. In the summer months, when the sea temperature averages around 24 degrees Celsius, combining a Maltese charter with three days on the Sicilian coastline (just 60NM away) makes for an unsurpassed experience, says Captain Tripp.
“The British empire leaving Malta in 1979 is the full stop to an incredibly long and chequered history of the island, but it’s the limestone coastline being worn away by the sea for millennia and highly dramatic cliff faces that are found on the south-southwest of the island that make for really spectacular cruising. When paired with two/three days in Sicily or the Aeolian Islands, which are also in shooting reach and take in the volcanic island of Stromboli and Taormina, the city on the hill, it makes for an even richer and hugely alternative charter.” 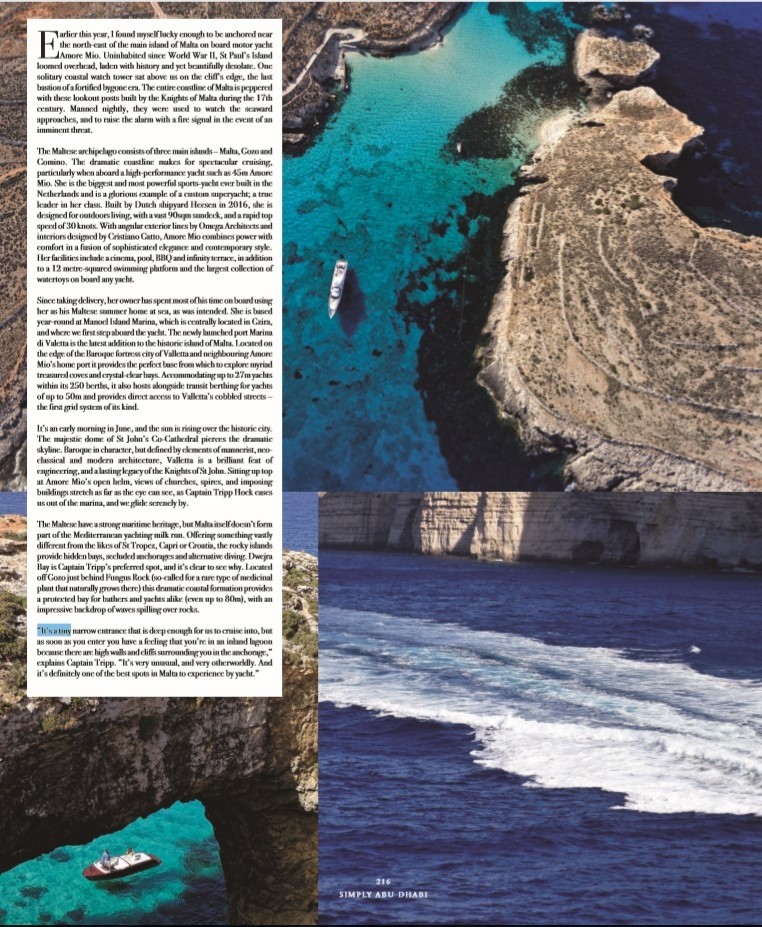 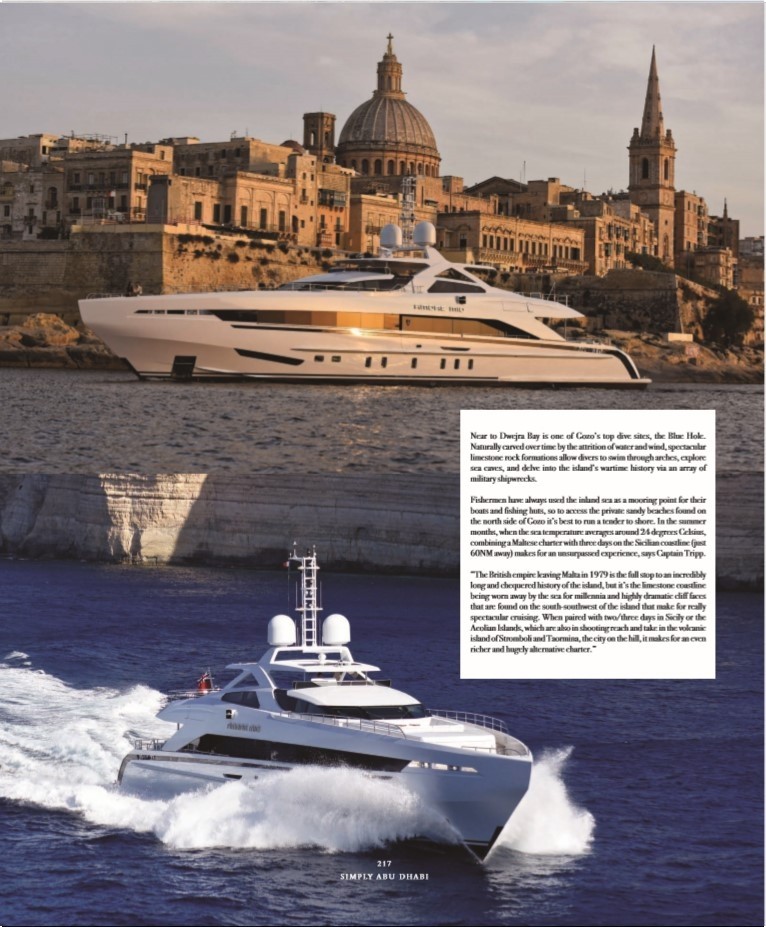